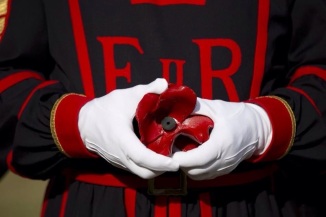 11th of Nov is Remembrance Day in Australia, Armistice Day in England and Veterans Day in America.This day is the anniversary of the signing of the armistice, which ended the World War I hostilities between the Allied nations and Germany in 1918. It is a day we honour the people who serve in the arm forces.

“The 11th hour of the 11th day of the 11th month attained a special significance in the post-war years. The moment when hostilities ceased on the Western Front became universally associated with the remembrance of those who had died in the war. This first modern world conflict had brought about the mobilisation of over 70 million people and left between 9 and 13 million dead, perhaps as many as one-third of them with no known grave. The allied nations chose this day and time for the commemoration of their war dead.” – Australian War Memorial 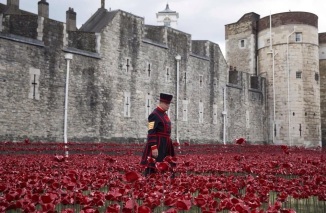 As a creative person, I simply love the marvellous, spectacular and distinctive London Tower poppy display by the award-winning theatre designer Tom Piper. It will move anyone who are affected by the war into tears seeing it live or on the TV screen. It is known as the “Blood Swept lands and Seas of Red,” Total 888,246 red ceramic flowers -representing a British or Colonial military fatality – that flow through the grounds around the tower. 8000 volunteers help to “plant” and complete the field. The poppies are available to purchase for 25 pounds, the money raised for several charities.

Below is the video: 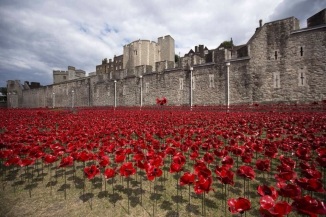 Leaving you with the most appropriate poem by John McCrae, May 1915 to ponder.

In Flanders fields the poppies blow Between the crosses,
row on row,
That mark our place;
and in the sky The larks,
still bravely singing,
fly Scarce heard amid the guns below.

We are the Dead.
Short days ago We lived, felt dawn, saw sunset glow,
Loved and were loved,
and now we lie In Flanders fields.

Take up our quarrel with the foe:
To you from failing hands we throw The torch;
be yours to hold it high.
If ye break faith with us who die We shall not sleep,
though poppies grow In Flanders fields. 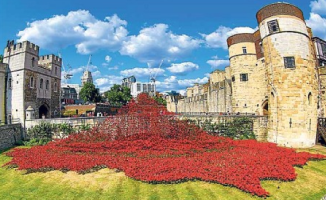